A perfect Pic - a lasting memory 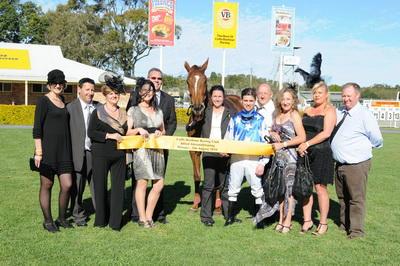 THOSE who say racing has become such big business there isn't any room left in it for sentimentality weren't at the Coffs Harbour races yesterday.

When Trevor Hardy's two-year-old filly Lastpic saluted in the opening event of the day, his thoughts were of his late wife Trish who passed away last year.

Lastpic was the last horse Trish chose to buy into before her untimely passing.

Hardy admitted that he felt sentimental after the impressive three and a quarter length win over Paws A Minute but he definitely approves of his wife's choice.

“She's got a very good pedigree and now she's won, there are two others in the family who have claimed Group races so it has really kicked the pedigree up for her,” he said of the Falbrav filly.

“She could be a valuable broodmare if she picks up a couple in town.”

Jockey Joshua Jones had Lastpic perfectly positioned in the 1400 metre Leading Edge Telecom Maiden and coming into the straight she was moved four wide and quickly moved up to the leader Emperor Theodesus.

That's when Jones pushed the go button and Lastpic left them all in her wake. By the time there was a furlong left in the race it was all over bar the shouting and Lastpic won like the heavily backed favourite that she was.

“She's been really consistent in the shorter races and she's been looking for that bit further,” Hardy said.

“She's bred to go much further and she's only a two-year-old taking on the older horses which makes it hard but there just aren't any two-year old races around.”

Hardy thinks that as a three-year-old, the filly can move out to 2000 metre races but as with most two-year-olds it's a case of gently, gently for now.

“We may give her another race, we'll have a look how she pulls up,” he said.

“Then we'll ease up and bring her back as a three-year old.”